Morfik 2.1 has a large number of new features. Some of these features are quite impressive while others are just small, though significant, improvements in existing features.

Lets look at the small improvements first. These encompass those small details that can seriously irritate you or make your day. In my particular case, the improvements to how styles are handled represent the greatest gain, in this group. Morfik 2.0′s implementation of styles while very impressive seemed a bit incomplete in some areas. Version 2.1 fills in the blanks left in the previous version. Styles now have a dedicated management facility which should make creating and distributing styles a much simpler and faster proposition.

The ability to individually configure which sides of a control will display a border or which corner will be rounded or not are other small changes to the capabilities available to visually design your website or application.

Moving into the realm of what is totally new, two features are quite impressive: Widgets and Packages. Widgets are user definable controls which can be visually created through aggregation. This feature alone may prove to be one of the most interesting in version 2.1 as it makes it much easier to develop controls for the Morfik platform. Packages are very interesting for much the same reason: they make it easier to redistribute code that you have created to other users.

The combination of Widgets and Packages might pave the way for more third party developers to venture into Morfik control creation. Morfik Packages are specially interesting as they can include tables, queries and all other types of documents you can create in a Morfik Application.

In a demonstration of forward thinking, Morfik acted to prevent name clashes between packages developed by different third party vendors. Before you can create your first package the IDE will take you through a registration process where you choose a prefix for your identifiers. This prefix can have from 3 to 6 characters in length and will be appended to the start of all identifier in your package. This will not preclude the possibility of name clashes between the items you create within your package, but these have always been the developer’s responsibility anyway.

I have done some basic experimenting with this feature, having registered the “mfw” prefix for MorfikWatch packages. The following picture shows my first attempt at creating a widget, already inserted into a form, at design time. 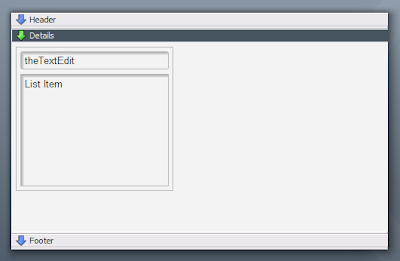 Along with the new version, Morfik made available a set of three demo packages and a 53 page document describing the most significant new features. In this document the creation of Widgets is described in detail as is another significant feature: Integrated Hosting.

Integrated Hosting is how Morfik is calling its hosting service offering which is available directly from within the IDE. The ease and speed of deployment this service offers will certainly interest a large number of developers, specially for development and demo purposes. It should provide much greater impact to just click through a wizard to deploy your application so that your users can see a live version of it, than to personally carry it on a notebook to show to other people. This of course is entirely dependent of type of application you are creating and the types of customers you have.

Apart from all I have just mentioned, Morfik 2.1 includes several features which can be used together to create sites which can be indexed by search engines: Clean URLs, HyperLinks and SEO-specific options for URLs.

All in all, Morfik 2.1 is a very impressive product. I will be adding new posts that go into more detail about specific features in the coming days.

This entry was posted in Deployment, M21, Packages, styles, Widgets. Bookmark the permalink.